More businesses are recognizing the potential advantages of transitioning from a traditional landline phone service to a more modern Voice over Internet Protocol communications system. For the information systems professionals who help manage their organization’s telephony, it’s important to possess an in-depth understanding of the differences and distinct advantages of each system, particularly if they end up being asked to recommend or oversee a transition from one to the other. 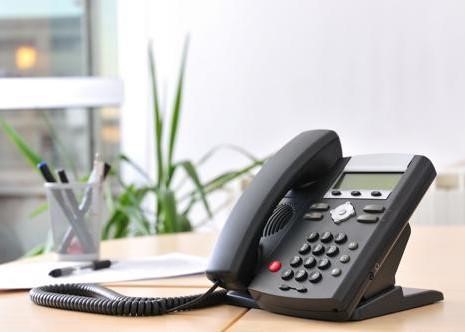 Although the younger generations are now growing up without a home phone, most people are familiar with traditional landline phones. Unlike a cellular device that relies on radio waves, a landline phone uses a metal wire or optical fiber telephone line for transmission. Though the number of landline subscribers continues to decline each year in the digital age, in the early 2000s there were over 1.2 billion fixed telephone lines worldwide, and today there are still over 900 million.

In addition to the advent of cellphones, a large contributor to the decline of landlines has been the rise of Voice over Internet Phone technology. Also known as internet calling, IP telephony, voice over network and internet telephony, VoIP uses the internet to make calls and breaks your voice into digital packet files that are sent over the web as data.

Though the first VoIP message was sent in 1973, the technology was quite primitive at the time. It was not until the 21st century that there has been explosive growth in the ubiquity of VoIP, which has occurred alongside the continued spread of internet availability. By 2013, 25% of U.S. households were using VoIP in place of their old landlines. The system has also proven increasingly popular with businesses all over the world, and research projects that the VoIP services market will continue to expand by 10% every year until 2021, growing billions in revenue annually.

To understand why so many corporations and other large organizations are ditching their landline phone service in favor of VoIP, it helps to know the advantages and disadvantages of each telephony system.

Pros and cons of VoIP vs. landline phones

There are several obvious reasons to cut the cord, as well as a few areas where landlines still hold an advantage over newer technologies.

Cost is the most commonly cited motivator for switching from a landline to a VoIP. Traditional office landline systems necessitate expensive hardware and complicated installations, in sharp contrast to cloud-based VoIP phone systems, which can be set up in a matter of minutes and at a marginal or nonexistent cost.

With landlines, monthly phone bills can also be expensive, particularly for a business that requires multiple phone lines. Additional functions or features for a landline telephone system, such as intercom, call transfer, or call queuing, require a private branch exchange that could set a business back thousands of dollars. Furthermore, long distance phone calls are famously expensive, and can add up quickly depending on a company’s size and reach. By switching from a landline to a VoIP, some businesses can cut their phone bills in half.

Portability is another point in the VoIP system’s favor, as the technology allows you to log in to your VoIP telephone and get a dial tone wherever you are in the world, as long as you have internet access. VoIP systems are also accessible via email and to employees who are travelling, provided they take their headset or IP phone, allowing them to contact co-workers or clients with a low-cost call.

A VoIP solution also offers a wider level of functionality, as many VoIP service providers also allow users to host video calls and transmit any form of multimedia, just as you would through the internet. With traditional landline phones you can only transmit your voice. There are also a whole host of additional features available through a VoIP system, including add-ons such as auto-attendants, call forwarding, call recording, call analytics, voicemail to email messaging, voicemail to text, and anonymous call rejection.

Traditional landlines do present some advantage over VoIP systems in terms of reliability. Having existed since the 1800s, traditional telephones are considered very reliable, and landlines do not tend to be as spotty as internet or cellphone service. This can be of paramount importance for a business, both because of the lost productivity caused by bad service, and the poor business image that is conveyed to clients and customers by dropped calls and poor reception.

In emergencies, the reliability of landlines can truly be a lifesaver. After natural disasters, power and internet outages can drag on for weeks, while landlines often remain functional or are only temporarily out of service.

However, the tide is turning when it comes to reliability. As internet service becomes increasingly universal and landline subscriptions continue to decline by the millions, it is likely only a matter of time until the VoIP system has the advantage when it comes to infrastructure.

The future of data communications careers

As more and more companies switch from landlines to VoIP services, telephony professionals will continue to be in high demand. A Bachelor of Science in Information Systems from UAB can help put you on a path to a career in telecommunications. You can learn more about the distinction between VoIP and landline phone systems, along with a great deal of relevant industry information, by completing a Business Data Communications course.

What a BS IS can teach you about management

Tips for networking in your online BS IS

Small Business Technology: Should You Still Have a Landline? by NFIB

The Benefits of VoIP for Business by Chron